Hello from The Reddings Residents’ Association

Are you struggling to get your essential food shopping done because you are self-isolating, a front line worker or have childcare issues? From Friday 24th April our volunteers will be making shopping trips to ASDA on Monday, Wednesday and Friday.

We can collect payment via our mobile card reader on delivery, you can purchase an ASDA Volunteer Shopping Card or we can collect your ‘Click and Collect’ order:

All our volunteers live in The Reddings and coordinators have undertaken an official DBS security check.

Thank you and take care from The Reddings Residents’ Association.

Prescription Deliveries: if you are self-isolating and cannot get out to pick up prescriptions, did you know you can ask to have these delivered to your home address?

Both Hawkes and St Marks pharmacies now have more capacity to offer home delivery of prescriptions, as teams of trusted volunteers are helping them with extra rounds in response to the pandemic.

If home delivery of prescriptions would be helpful to you at this time, please speak to your local pharmacy.

The Reddings Residents’ Association (TRRA) is back!

By now you should all have had a card or flyer through your door about our community response to the Covid-19 crisis. The feedback has been very positive and as well as identifying a few people in need of help, has resulted in quite a few new volunteers. Each card had contact details of a person living in your immediate area written on the front and you may have spoken to them or another local volunteer already. They should be your first point of call, but you can contact any of the numbers on the list. If anyone that you don’t know knocks on your door offering help, ask to see ID and if you have any concerns you can call one of us to make sure they are who they say they are.

Many of you will be aware that The Reddings Residents’ Association became dormant last year when it was unable to attract enough people willing to form a management committee or stand as officers, which is required in the constitution. Unsurprisingly this has now changed and the group of volunteers have agreed a new temporary committee be formed to coordinate our efforts during the Covid-19 crisis. Channelling our efforts through TRRA also helps us in dealings with Cheltenham Borough Council and other public bodies. The three officers that were “volunteered” for the officer positions were Rich Minors as Treasurer, Simon Willis as Secretary and Cliff Naylor as Chair. Once this crisis is over, hopefully we can resume regular TRRA meetings and elect new officers as required. If anyone objects to these temporary appointments or wants to stand for these positions please do not hesitate to make contact.

Previously TRRA kept a mailing list and members received updates via email. If you wish to be included on the distribution (or removed), please send a private message.

An updated version of the TRRA constitution has been posted on this site, the main change being redrawing the boundary to cover The Reddings area only, no longer including Bamfurlong which is over the border in Tewkesbury. We can of course continue to work with residents in Bamfurlong as necessary. Another action we have taken is to arrange a bank account to handle any monies that we might receive, either as donations or grants from the local authorities.

We will continue to post updates on Facebook and continue to update this website to provide information and links to official information issued by central and local government and other agencies such as the NHS. 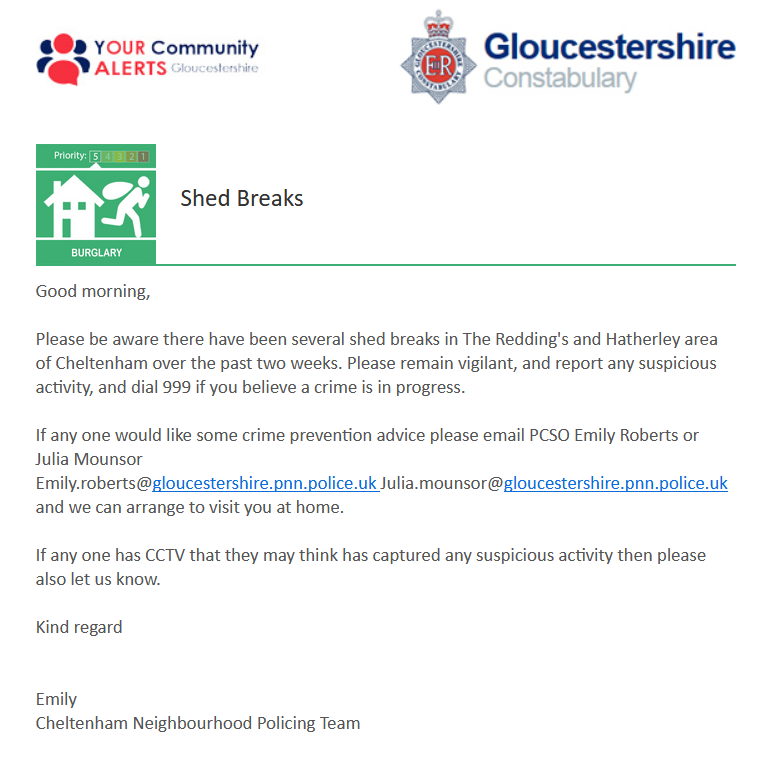 The tubes were supplied via Friends of the Earth and were analysed by a certified laboratory at Gradko International who manufacture and analyse the majority of testing equipment used by organisations across the country.

Five monitoring locations were used based upon local knowledge of traffic hotspots and recent / proposed development with tubes being changed on a monthly basis.

The results from the last six months are as follows:

A graphical representation of the bias adjusted figures shows a general trend of increasing levels at all five sites over the monitoring period: 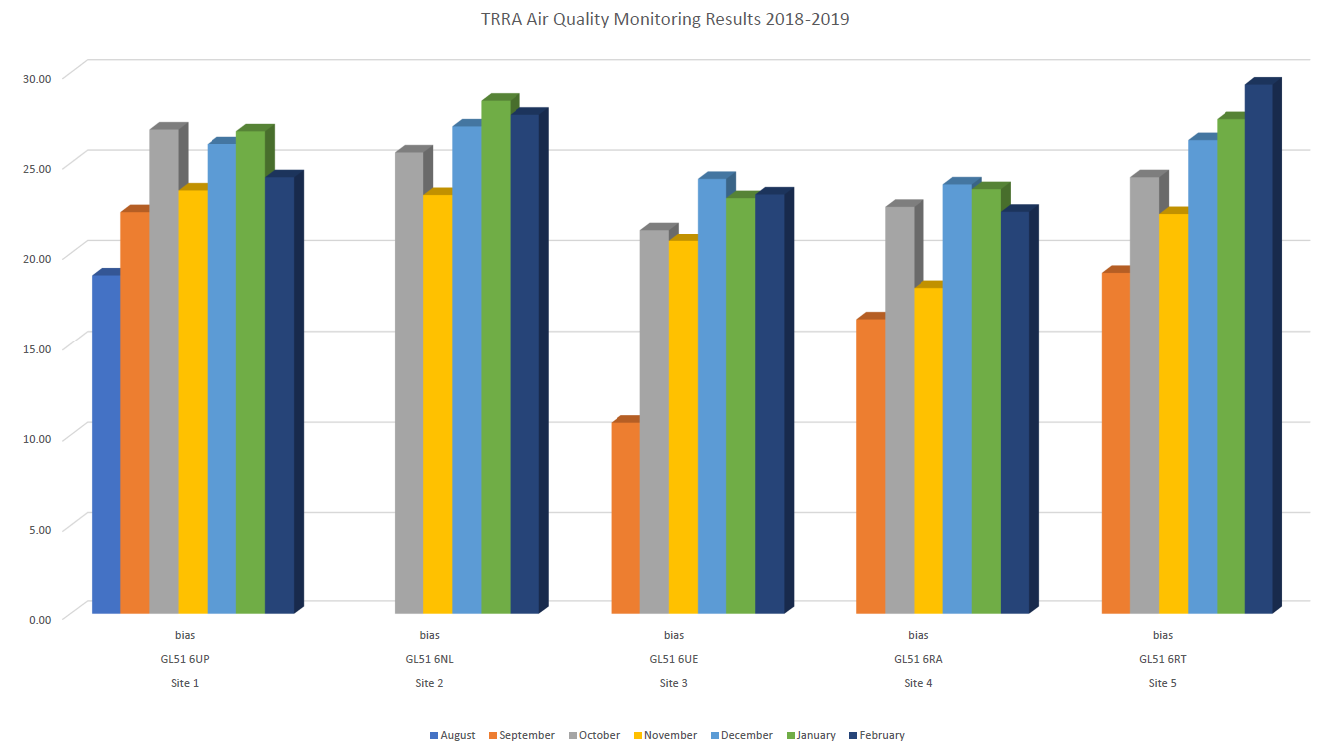 Whilst no sites are currently likely to breach the established “danger” limit of 40µg/m3 (taken as an average over a year)  the recorded levels are higher than might be expected for a “semi-rural” suburb and are, in certain cases, higher than levels being recorded at acknowledged problem locations in the centre of Cheltenham.

The developments at Grovefield Way, new care home, Blenheim Villas, new offices next to Asda and the Park and Ride extension for the Cyber Park have not even started / opened yet.

It is a situation we can only see getting worse particularly when “destination” development is being allowed in the area and infrastructure is already unable to cope e.g. Arle Court roundabout will be at over 200% capacity based upon currently permissioned development.

Further background information about air quality and its effects are available in the FoE publication below:

Some residents have asked about implementation of a “20 is plenty” scheme in the area particularly with regards to addressing speeding issues on Reddings Road / The Reddings.

For information, Cheltenham Borough Council carried out a town wide consultation during the latter part of 2017, the results of which can be seen here:

Whilst there was a majority in favour, it appears any implementation would have to be agreed at a county level. There is also conflicting evidence as to the effectiveness of such measures actually reducing speeds and improving air quality, and no indication that it would necessarily encourage a modal shift in transport methods and a subsequent reduction in car use.

It should also be noted that even if such a scheme was introduced, the main roads through the area (including Reddings Road / The Reddings) would likely be exempt from any 20mph limit. See map below:

Any self enforcement measures such a speed humps and chicanes have previously been ruled out on roads such Reddings Road / The Reddings due to their designation as bus routes. The Section 106 money generated from the Asda development, which was originally intended for installing local traffic calming measures, has now all been spent on the A40 bus lane anyway.

The Reddings is due to be allocated a Vehicle Activated Sign which can be installed, and relocated to where residents feel there are specific problems, to improve speed awareness. Please email us with suggestions for suitable locations.

At the link below is a map which has been produced by Sustrans, following various consultations with the community during the last year, that aims to highlight family friendly routes through the area for walking and cycling:

Whilst we are aware that traffic congestion and air quality issues are being caused by vehicles travelling through, and to, the area, residents can play a part in reducing car usage as well as benefiting from increased levels of activity.

An ideal opportunity to try some of these routes is approaching in the shape of Cycle to Work Day on Wednesday 15th August 2018:

If you can think of any local businesses who might be interested in promoting this, or you have concerns about any particular routes or areas, please let us know.

For more information about Sustrans and the work that they do please visit: